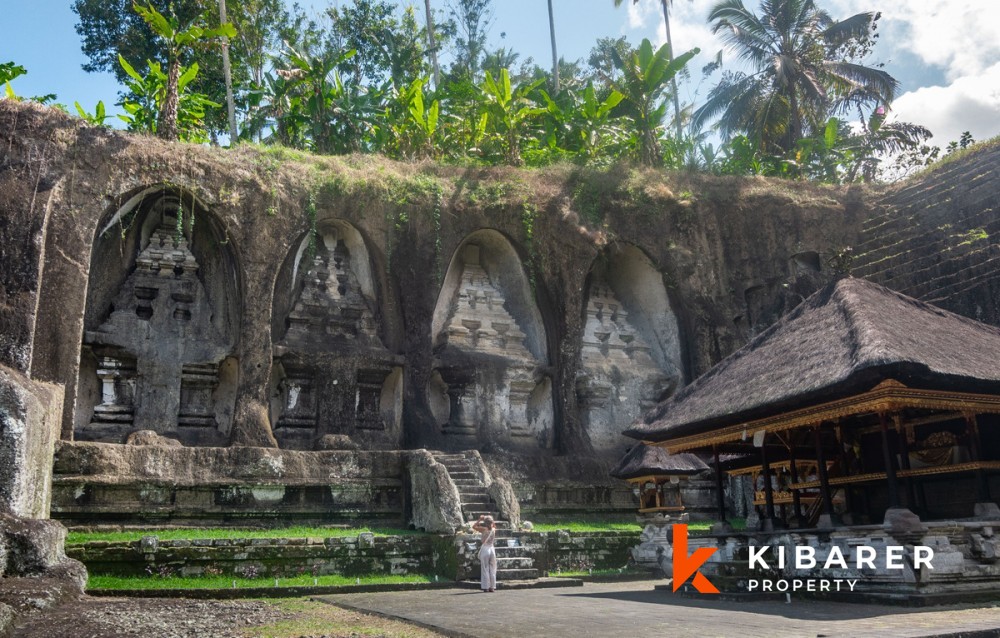 Gunung Kawi is one of the most ancient archaeological site, located in  in the Tampaksiring area 30-minutes north of Ubud. It is a beautiful stunning complex of shrines of an 11th Century old Hindu Civilization, it is a heaven for lover of history and culture. However for some reason has always remained off from the interest and the attraction of the tourists.

Tampaksiring has a great significance in the mythology and history and the name itself is derived from an ancient legend. Mayadenawa was a king that once ruled Bali, his monarch was said to possess malevolent great powers and they forbid any hindu to worship in his kingdom coming from a Mahayana Buddhist background.

There was a great battle between Mayadenawa and the god Indra – fighting on behalf of the Hindu believers in Bali. The evil king was said to have used his magical powers to change the landscape of the battlegrounds to repel Indra’s forces, using his footsteps to carve into the mountainside. This is the origin of Tampaksiring, tampak meaning foot and siring meaning slanted.

It is the very same battle that brought birth to Tirta Empul, the famous holy water temple in Tampaksiring. A water source said to be made by the god Indra to heal his poisoned troops. The downfall of Mayadenawa in this ancient siege is also one of the legends behind the Galungan Festival, when the triumph of good (dharma) over evil (adharma) is celebrated. 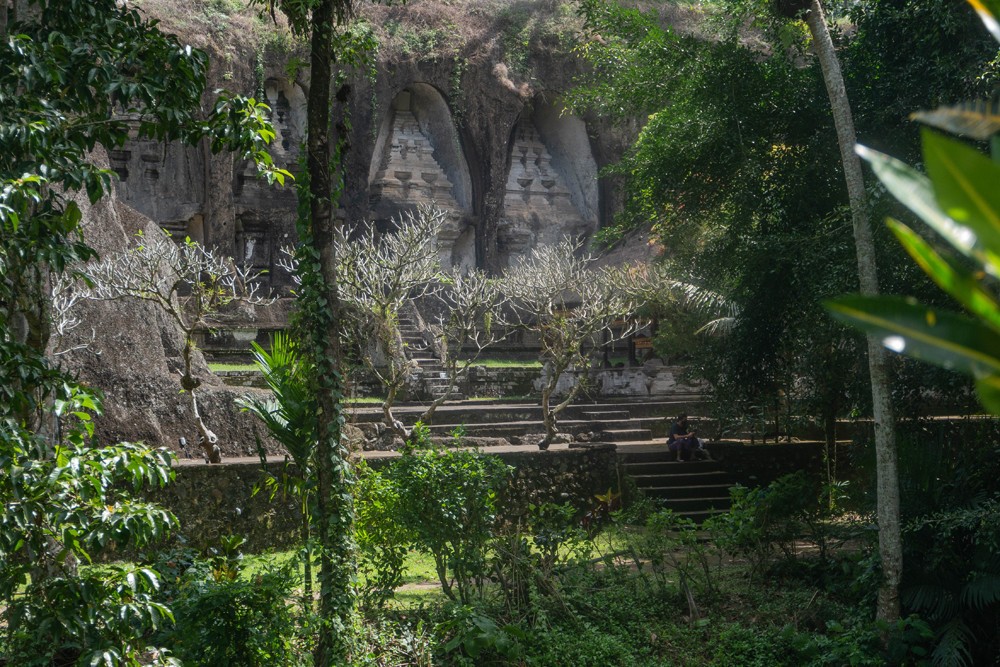 To reach Gunung Kawi, your journey starts from the steep top valley of the Pakerisan River which is deemed highly in religious beliefs to the Balinese. The river flows through to Goa Gajah Temple another holy site of Bali.

Since it is a holy site, you will be asked to wear a sash and a sarong for your journey through. After dressing appropriately you will take a long walk down the stairs to the river. The walk is accompanied by the beautiful views of the surrounding

where a mosaic of terraced paddy fields cascade dramatically down the valley’s side, and towering palm trees jut around their edges

You’ll know you’ve reached the start of the temple area as the stairs suddenly become encased by sheer faces of limestone left and right, leading into an ancient archway that acts as the area’s dramatic entrance. 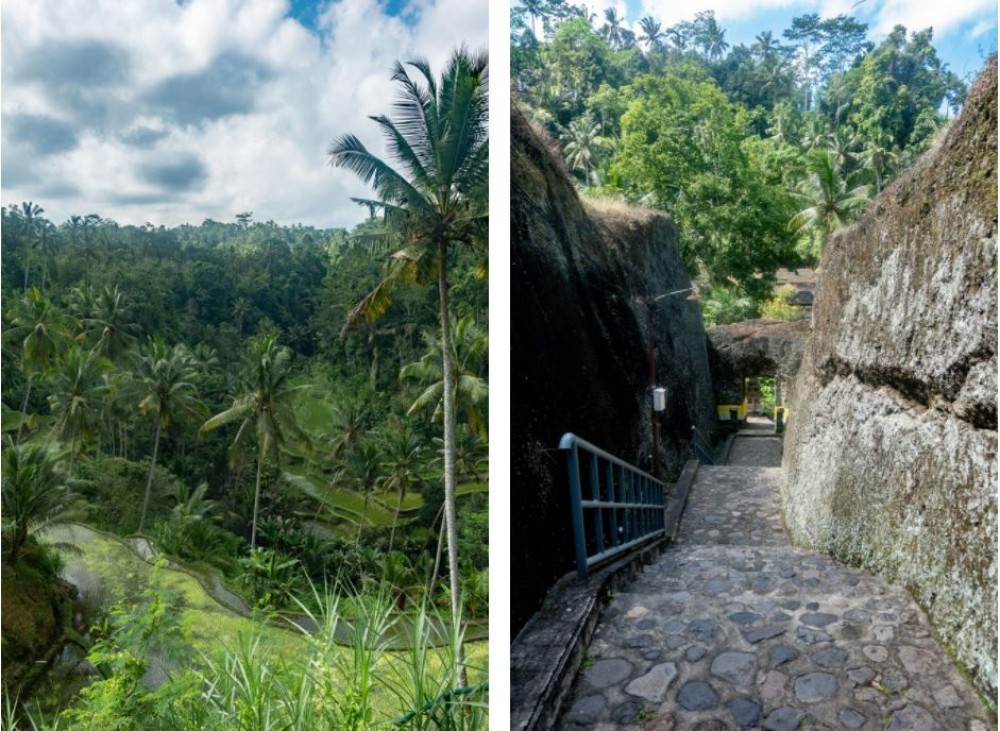 Gunung Kawi is home to pedharman shrines and not just one but ten of them. These shrines are dedicated to the ancient kings. The uniqueness of the shrines is that they are carved directly into the face of cliff and eight meters tall tower.

Five shrines are built adjacently on the east side of the Pakerisan River, while the otherfour opposite on the west side. The final shrine stands alone on the Bukit Gundul mountainside.

Within this impressive complex you will find caves and rooms cut into the rock-face as well; a honeycomb of tunnels leads you into different rooms where ascetics or hermits used to meditate, the stone walls weathered through the centuries, but still intact. 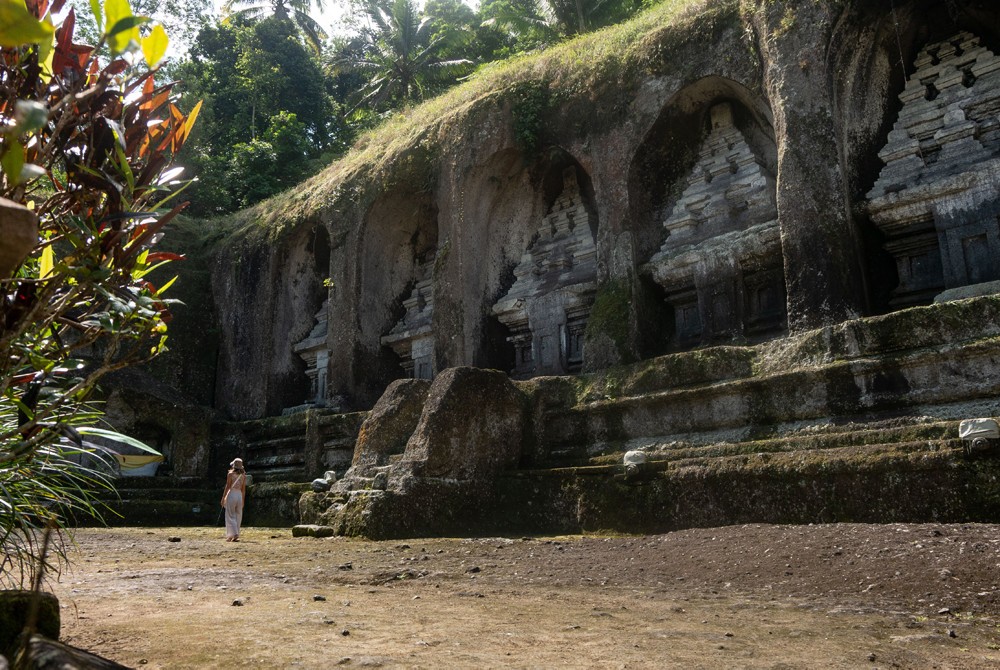 Gunung Kawi is believed to have been built in 1080 AD as a dedication to the Kings of Old. The story revolves around great King Udayana of the Warmadewa Dynasty, Airlangga his first son, the hero and the ruler king of Java and the only ruler of Kahirupan Kingdom.

It is believed that King Anak Wungsu who is the third son of Udayana built these shrines as a dedication to his Father, brothers and Mahendratta, his mother, The princess of of the Javanese Medang Kingdom (later reclaimed by Airlangga). Other theories suggest that the shrines are dedicated to King Anak Wungsu himself, along with his queens and concubines. 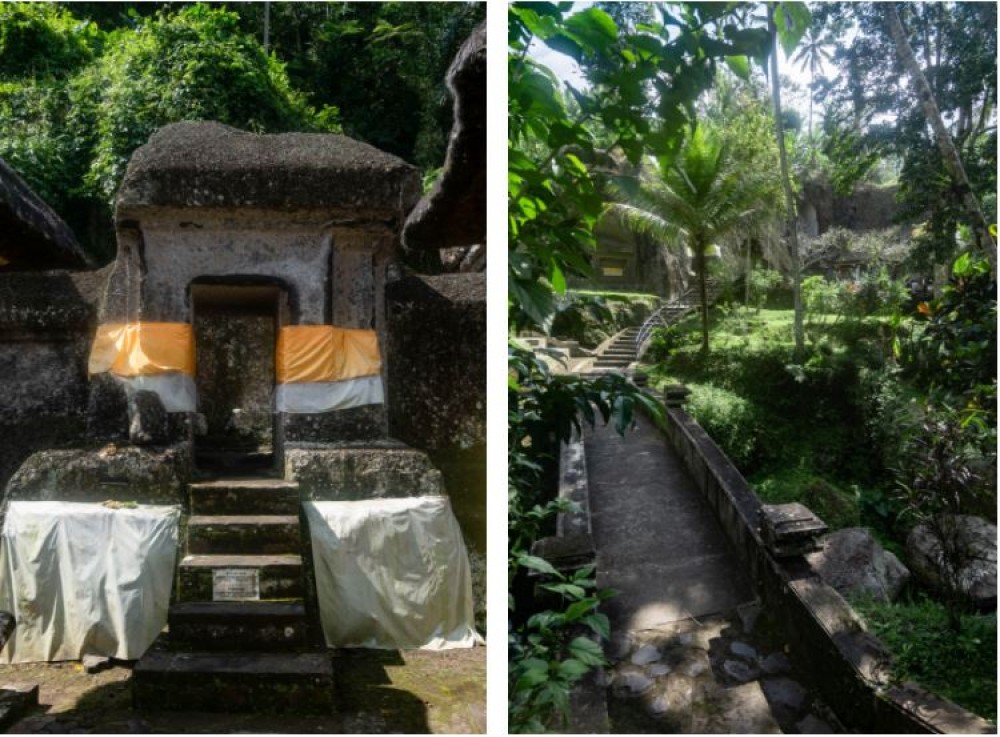 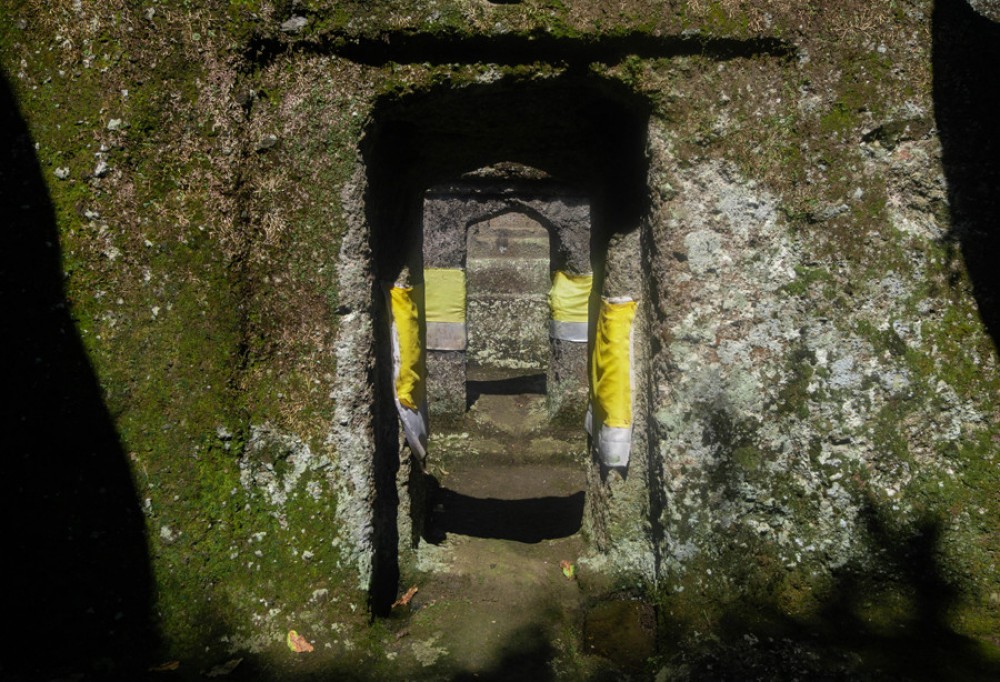 Pura Gunung Kawi lies inside the Gunung Kawi Complex, it is a modern day Balinese Hindu Temple and prayers and offerings are still practiced here today. Gunung Kawi as a source of holy water plays an important role especially on on the banks of the sacred Pakerisan River. The river flows down into the Tirta Empul as well, where the Balinese Hindu practice the Melukat cleansing ritual.

You will find more caves beautifully carved into the valley walls on the east side beyond the giant shrines. These are used by pilgrims for mediating of all walks of nature. Inside the caves, you will see how nature has over taken the walls with deep green moss and vines hanging at the entrance. Hence giving it a tomb like atmosphere perfect for an Indiana Jones movie shoot.