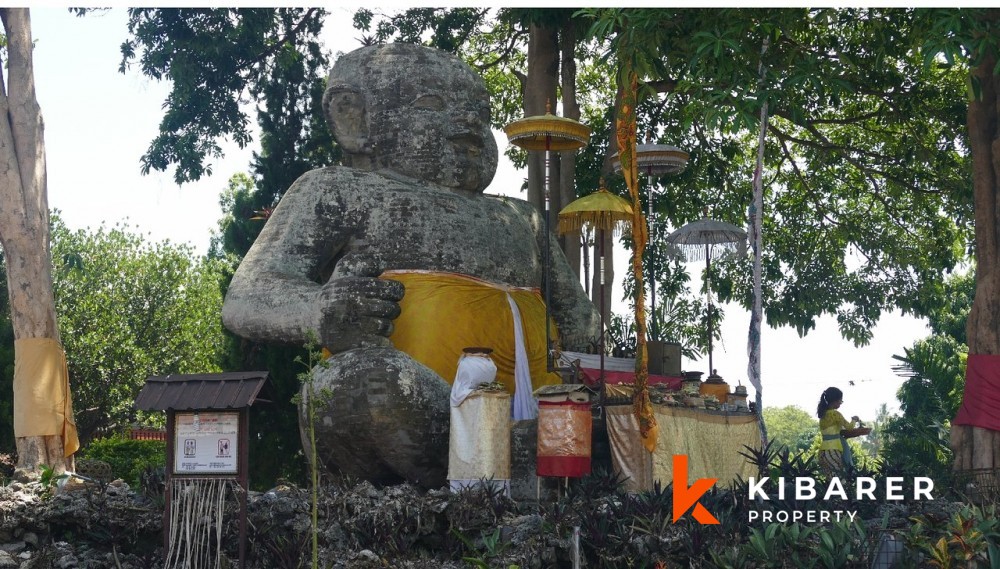 patung bayi - the statue of crying baby in bali

A giant baby statue with crossed legs is hard to miss if you travel on he main road of Sakah in Sukawati as its wide head towering on your. Its a catus pata location aka center of an area which is deemed sacred, this is a symbolic monument built 30 years ago. However when it was built not a single soul was willing to share the backstory.

There's no doubt that the stories and the tales related to the statue are often chilling and scary. Some have heard a wails on a full moon night from the statue. Some claim to have seen tears rolling down and some have topped it by claiming its head shifting and the baby peering over towards them.The intersection where the statue perched is not unknown to vehicular tragedies either. It didn’t take long for local residents to brand it a curse.

No one dared to speak about the origin of the statue since 1989 when it was built, until recently.  Jero Mangku Bagus Balik one of the founding fathers recently shared the story and put the curiosity of the island to bed.

To most people's surprise the back story is more philosophical narrative; spiritual symbolism rather than an ill-fated public possession. There was an appeal to erect a monument marking the joy and pride of Gianyar. However due to unforeseen reason they were unable to sculpt a Wayang Figure so they agreed on a statue of Sang Hyang Brahma Lelare.

Shiva represented in a form of Baby is known as Brahma Lelare which basically signifies human birth or a new beginning. The statue, situated at the intersection that splits Sakah’s three main roads, is believed to be the meeting place between the magic of Shiva and the sacred Buddha (Sang Hyang Widhi). ‘Blah Tanah Sake Ah’ means that in the middle of a division (blah tanah) lies a view (sake) with no limits between the high and low (ah). It’s where two axis meet.

With reference to the strange events happening around the statue, Jero Mangku Bagus Balik said that its just a reminder to the people that even inanimate statues can bear powers of sekala and niskala (the seen and the unseen).

People visit the statue to pray, specially the childless ones asking for offspring and you will see even the non-hindu believers praying for a child there.

Whether it’s the hallowed ground or a wicked jinx, the ongoings around Bali’s giant baby statue remains one of the most notorious myths on the island.