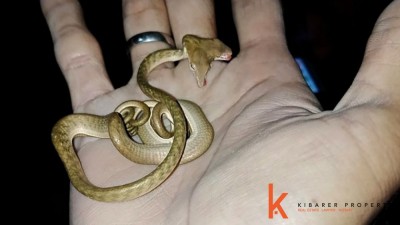 Seeing a snake right in front of you is shocking itself but imagine seeing a two headed rare serpent sneaking up on you. This is exactly what shocked the residents of a small village in Bali when they found a rare two headed serpent among them. The local resident who found the snake said " I got home and unknowingly I parked by bike right next to the snake".

When he looked closely he noticed the snake has two heads and it took him by a shock. There is a video that shows the snake surrounded by villagers and children. The snake seems small as it is seen on a palm of a human. However there are no further information about what kind of snake breed it is or if it was venomous or not.

Experts have previously quoted two headed snakes to be a rare occurrence and mostly found in captivity.