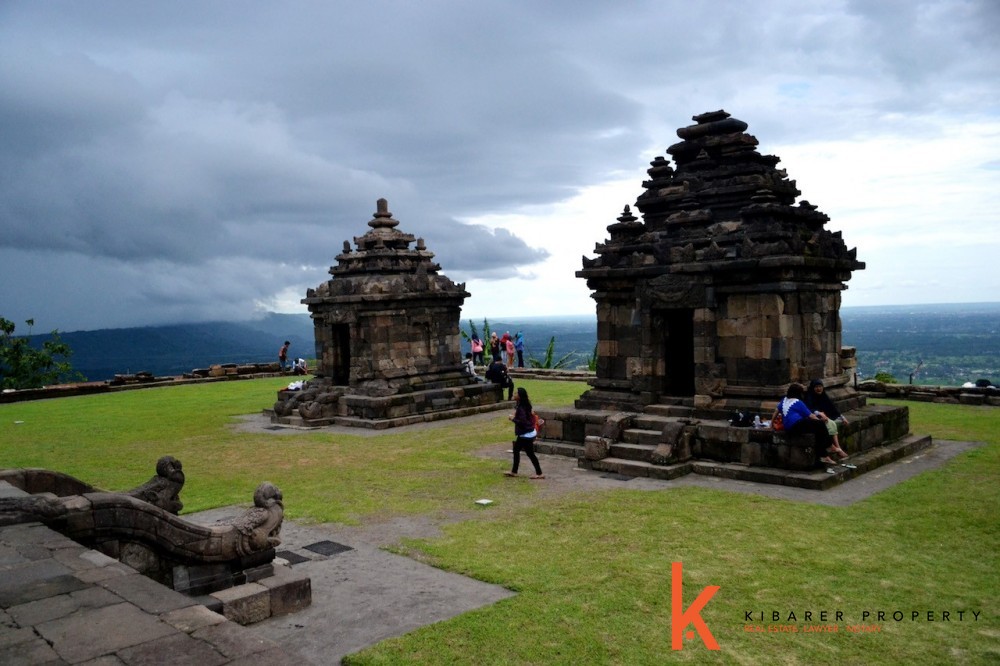 In 1900s Nicolaas Johannes Krom a Dutch epigraphist and archeologist, conducted a research on the hill and named it Shiva Plateau because of the majority of temples near by were dedicated to Hindu deity Shiva.

These temples were built in 8th century during the right of Medang kingdom. Other than Hindu temples you will see many buddhist temples and temples with the mix influence of hinduism and buddhism such as Ratu Boko and Sojiwan temples are also found on Shiva Plateau.

There are many historical sites spread at Shiva Plateau that dates back to Medang Kingdom, some are going through excavation and renovation. Some can be found on the residents property as well.

Exploring the historical sites is always an attraction even for those who are normally not into the history as much. Shiva Plateau is a perfect place for the tourist to visit historical sites and the beautiful hill with plenty of gardens and villages. Here are some of the famous historical sites we recommend that you definitely visit

Thought to have been built in 8th century, this temple is a compound that involves the King's palace. It is believed to be built by the Sailendra tribe from the Medang kingdom. Ratu Boko Temple is located 196 meters above sea level in Bokoharjo and Sambirejo villages on top of the hill. It covers a huge area of 25 Hectare.

The temple has a main gate of stone, a moat and a fortress. It also features cremation chamber, a water castle believed to be the Royal Bath, an assembly hall, a meditation cave and Keputren aka living quarters of the princess.

It is a perfect tourist site where you enjoy a perfect sunset, with ample parking facility, a restaurants and a tourist information center.

Banyunibo is a buddhist temple believed to be built in 9th Century in Bokoharjo Village. It is located at a distance of around 1.8 Km from Ratu Boko. The temple nestles beautifully between stunning lush green rice fields and a local residence area in Shiva Plateau.

The temple has a Stupa on the top of its main chamber and another chamber with kalamakara relief carved on its gate, measuring 6.8 by 4.5 meters.

These ruins were discovered in 1948, the main chamber is the only area of the temple to have gone through renovations. The other Six Perwara are not renovated due to weak conditions of the stones.

It is though undergoing through a facelift which includes a development of a garden, open space and various eateries. The open space is going to be used for art and cultural performances.

Spread over an area of 0.8 Hectare in the form of beautiful terraces with stone wall Candi Ijo is one of the most unique temples on Shiva Plateau. The area is though believed to be more than 0.8 hectare as many artifacts are spread around the temple area.

The main attraction and area of Candi Ijo temple is featured by a pair of sizable Lingga Yoni, they symbolize virility and fertility and are often found in both Hindu and Buddhist temples. Further it is surrounded by three small temples that worship Brahma, Vishnu and Shiva.

Candi Ijo is located at the highest altitude at Shiva Plateau which is 425 meters above sea level. The location of this temple is called “Gumuk Ijo” as per the references written in Poh's inscription dating over year 906.

These temples stand just 100 meters apart from each other with a narrow road in between in Candisari Hamlet. Both of these temples were built during the reign of Medang Kingdom.

Candi Barong was built by Sri Kumbaja and was initially named as Candi Sari Suragedug as per an inscription found at Ratu Boko Temple. The temple was renamed later after the Makara Relief was carved on its main chamber which resembles the shape of Barong (lion-like creature and character in Balinese mythology, dubbed the king of spirits)

Candi Dawangsari ruins are now going through a process of renovations and rebuilding, it stands on a higher ground as compared to Barong. You can see a sizable stupa base from the circular layouts of stones. There are other small stupas found at the side of the temple however most of them are not in good condition.

Located in Sumberwatu village, this statue makes a perfect stop over point before visiting Candi Miri. Both of these attractions nestles between the beautiful trees in a secluded corner of hillside.

Ganesha Dowangsari was discovered in real bad conditions. Depicting a figure with the head of an Elephant, the two meter tall statue only has a trunk, legs and torso.

The Ganesha Statue seems to be a part of a larger complex but so far no proper research has been conducted on the site.

Travelers are recommended to hire a guide for the journey to Candi Miri from Ganesha Dowangsari due to the isolated location with tricky paths. The trip can be made on a vehicle until the road end of Sambirejo Village after that it has to be done on foot, climbing the hill and following the proper trail through the woods. Candi Miri is a beautiful hindu temple in a state of ruins. The temple is in need of renovations but it does make a thrilling adventurous trip for those who love woods and hikes.